A New Paradigm is Upon Us – The Donor Pyramid is Narrowing – Happy New Year!

It is time for our industry to respond to a changing donor-fundraising paradigm that is rapidly accelerating and can catch many stakeholder nonprofits off guard.  While the “donor pyramid” has served us well for decades, where the broad base of the pyramid represents many small dollar donors and the top represents transformational donors, new economic dynamics in the US population necessitate a new look at the pyramid and advancement strategies.

The Pyramid is Narrowing

The past five to ten years is noted for a shrinking donor base overall and especially small dollar donors. This is in part due to millennials being less better off than their parents (boomers); the burden of the explosion of student debt for graduates and their parents; the growth of the “gig” economy which offers less job and income security; and, declining home ownership rates which means there is less opportunity for wealth creation and household financial stability.  In 2018, homeownership dropped to a lower rate than it was in 1994, with a rate of 64.2%.  This is an important bellwether for overall economic vitality.

In addition, retirement is more expensive than ever. According to Fidelity Investments, a person should have eight times their salary saved by age 60 for retirement purposes. Yet, a November 2017 report from the Economic Policy Institute, the median retirement savings for families between 50 and 55 is only $8,000.

Data from the National Center for Charitable Statistics supports the argument that there are fewer donors overall, and that the rise in total giving is heavily influenced by a growing number of much larger gifts from wealthier donors. 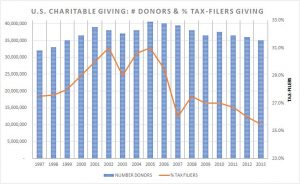 This trend may be exacerbated with the new tax law that will result in an estimated 30 million fewer tax payers itemizing in 2018 and beyond.

The 100 largest U.S. charities, compiled by William P. Barrett shows this elite group together received $49 billion in gifts, representing 12% of the $410 billion taken in by the country’s 1.5 million nonprofits.  While I take issue with how some the “private support” has been characterized for these organizations, it should be noted that many of them are longstanding institutions, most of which have invested heavily over the years in direct mail and response fundraising to build very large donor bases and pools of potential major and planned gift donors.

It is clear, there is ever-more competition for sustaining funding between nonprofits from a shrinking and increasingly polarized donor universe.

A sustainable donor base is characterized by a growing number of loyal donors who give regularly, and give increasingly larger gifts over time.  This includes small dollar donors and major donors.  To respond to the changing paradigm addressed above, let’s look at some core strategies for you to consider.

The 500 or so most successful nonprofits have invested heavily and wisely over the years to build their donor base through direct mail, digital and broadcast media.  This was done when the “cost of entry” was relatively modest by today’s standards.  As we all know, the rate of return of donor acquisition using direct mail and digital, and the ability to retain donors over time are increasingly challenging – even though these are still the best ways to acquire and retain donors.

Given these realities, along with a declining small dollar donor base, it would be wise to focus on acquiring more “sticky” donors.  There is ample data to suggest a direct relationship with the size of a donor’s first gift and whether they will remain a loyal donor.

It would make sense to design your appeals, list selection and segmentation, and ask strings to seek first time contributions of $50 or more.  This will be at the sacrifice of a higher rate of return overall, but over time, these acquired donors will be more likely to remain donors and more than justify the sacrifice of near-term response rates, gross revenue and number of donors acquired.

We all know that major donor gifts are necessary to drive a successful advancement program.  But it is challenging for smaller organization, as well as some larger ones, to create a robust major donor and planned giving program.  The primary reasons for this, from my first hand experience with more than a hundred organizations, are: executive leaders and board members do not want to get involved with fundraising; development staff’s lack of experience in, and being intimidated by major donor development; and, the difficulty and expense of hiring qualified major donor fundraisers.

This is a tough nut to crack, but given the polarization of wealth and the aging of the wealthy, it is centrally important to create an embedded major and planned giving donor program.  Qualified consultants, including Copley Raff can help with this.  I also want to refer you to Copley Raff’s GivingTake blog posts on this subject that may be helpful.

Investing in donor stewardship is centrally important to all of the above.  I hear over and over from donors how well they were treated by this organization and how absent other benefiting organizations are.  Donor loyalty and appreciation will go to those organizations that keep their stakeholders informed of progress toward mission, how funds are spent and how more funds will be used.

The harsh reality is wealth polarization will likely continue, government funds that are used by nonprofits for programming and overhead will remain flat or decline over time, and sustaining ticket sales and subscriptions for cultural organizations will become even more challenging.  As a result, there will be an increase of nonprofit mergers, which in my opinion is a good result, but there will also be an increasing number of nonprofit closures. And the public benefits these organizations provide will, unfortunately, diminish.

1.    Take stock in how your advancement operation is working now and how it may need to change to respond to the changing donor landscape.

2.    Be realistic about your five-year projections and engage leadership to help with appropriate course corrections.

3.    Build your personal and organizational expertise in major donor development, because that is where the action will be for the foreseeable future.

About the Author: Larry Raff

Larry G. Raff is president and principal of Copley Raff, Inc., a national management and fundraising consulting firm that specializes in raising the sights of nonprofit organizations and helping them to meet aspirational goals. A current member of The Friday Forum's Board of Directors, Larry was also a former Board President. From his internationally recognized "GivingTake" Blog to articles published in Becker’s Hospital Review, Fundraising Success Magazine and Board Source, Larry is recognized as an industry expert in Philanthropic Leadership.

There are no upcoming events at this time.